Of Sweden’s 72 FA regions, only 21 had a positive population growth in the period 1990-2008. Compared with regional population growth in the 1990s, there was some improvement in the 2000s, but strong population decreases remain in a number of smaller FA regions. Immigration accounts for a large share of the improvement in the regions. All FA regions had an immigration surplus in the period 2000-2008. However, immigrants have proven to also have a certain tendency to move on. Consequently, immigrants (eventually) contribute to a relatively large domestic relocation deficit in many smaller FA regions. With regard to the development of the population trend in terms of births and deaths, it is generally only the largest FA regions that exhibited a net increase in births in 2000- 2008. This made the large regions less reliant on an influx from other regions.

Prolonged regional population trends have led to growing numbers of people living in ever fewer FA regions. Geographical population concentration has increased continuously since the 1970s. The young population accounts for the main increase in concentration in Sweden. In many regions, particularly smaller regions, there is a large imbalance between various age groups. Several of the small FA regions are approaching a situation where there is one person of an employable age (20-64 years) for every person in the other ages.

In 2007, there were 70,000 fewer people gainfully employed than at the beginning of the 1990s. The 1990s was a troublesome period of adjustment where most FA regions experienced a negative employment trend. This situation changed in the latter part of the 2000s and has been very positive for most regions.

Sweden’s regions were hit hard by the financial crisis in 2008. Preliminary figures indicate that the number of jobseekers increased markedly in all regions. However, it is too early to provide a more detailed illustration of the impact of the crisis on Sweden’s regions due to a lack of reliable statistics. Growth Analysis intends to present an analysis of the impact of the financial crisis at the beginning of 2010.

Regional business in the metropolitan regions and regional centres is generally characterised by a high level of industry diversification and low workplace concentration. Small regions, on the other hand, generally have a low level of industry diversification and high workplace concentration. This indicates that the small regions are more vulnerable to economic shocks.

In much the same way that the population is highly concentrated to the largest regions, the production values are also concentrated to a few FA regions. Slightly more than half of Sweden’s total daily wage sum in 2007 originated in the metropolitan regions of Stockholm, Gothenburg and Malmö. This concentration has not decreased in the past decade either, but rather increased. Compared to other OECD countries, Sweden has a high concentration of production value. However, the regional income distribution, i.e. income per capita, has decreased strongly in the past six years. This is attributed to the concentration tendencies for the population and production tracking one another.

The regional development of labour productivity amounts to between 1 to 3 per cent. Besides the metropolitan regions, it was primarily industry-heavy FA regions that developed best. 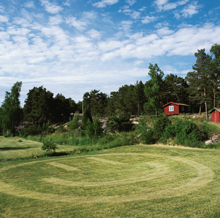