- a report on the future supply and demand for labour in the municipalities Gällivare, Pajala and Kiruna

The Swedish Government has tasked the Swedish Agency for Growth Policy Analysis (Tillväxtanalys) with investigating the future supply and demand for labour in the municipalities Gällivare, Pajala and Kiruna, following the expansion of the mining industry. The main purpose of the investigation is to analyze how regions facing significant industrial changes should act in order to ensure a favourable development. The result is presented in an interim report on 14 May and in a final report on 30 June, 2010. The report is intended to serve as guidance to the municipalities of Gällivare, Pajala and Kiruna, and also to provide guidance to other regions facing significant industrial investments.

The report consists of six chapters (all in Swedish). Chapter one consists of a brief introduction and description of the structure of the report. Chapter two provides a theoretical overview, which describes the problems associated with mining regions and single-industry cities, i.e. communities that are heavily dominated by a single industry. Chapter three consists of background descriptions of Gällivare, Kiruna and Pajala, in order to describe the local conditions for development. Chapter four presents a number of future scenarios and key variables for the three municipalities. The forecasts have been carried out by WSP Analysis & Strategy with the help of rAps, a tool designed specifically to predict future regional development. The fifth chapter contains summary conclusions for each region as well as a discussion on possible future strategies. The sixth and final chapter consists of a discussion on the results and strategies.

The municipalities of Gällivare, Kiruna and Pajala are all located in the northernmost part of Sweden, north of the polar circle in the middle of the Barents region. The region is characterized by a sparse settlement structure, few inhabitants, long distances, a negative trend in population growth and an ageing population. The future mining investments imply new possibilities for development, causing both direct and indirect effects on the local economy.

According to theory, the direct effect of a new mining investment is an increase in employment in the mining industry, while the indirect effects involve spillover effects on other local industries. The indirect effects consist in part of an increased demand for inputs from suppliers, in several stages, but also of an increase in private consumption due to higher incomes. This increase in consumption will obviously be higher if there is also an influx of new residents. However, there is also the possibility that the new workers will decide to commute to the municipality rather than to reside there. In addition, there is also the risk that the bulk of the investments will benefit other neighbouring regions. Depending on the local conditions, an industrial investment may cause different effects on employment and population in different regions.

The magnitude of the local effects of a new mining industry is primarily determined by the size of the local industry, and by the extent to which the region is able to attract new residents to work in mining and related industries. Furthermore, the life expectancy of a mine is often uncertain and can vary greatly. The global economy as well as changes in world prices for minerals also plays a vital part in the profitability and lifespan of the mining industry. Therefore, the long-term local effects of a new mining industry are difficult to determine in advance. 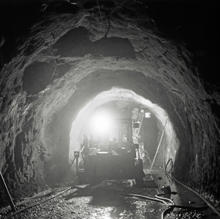 The orefield changing - a report on the future supply and demand for labour in the municipalities Gällivare, Pajala and Kiruna