Japanese health care is of high standard but with some distinct features: high co-payments, extremely many hospitals, universal access and service without gatekeepers. Foremost – Japan spends exceptionally little on their health care system due to a number of social factors.

But there is a backside to this micro-management and that is a lack of innovation. The Japanese health care system faces the problem of overutilization because of shrinking and ageing population. Public opinion among Japanese on their health care system is overall positive but there are worries regarding the future.

Japanese Telemedicine and Robotics stand out, but it is in Medical Informatics where the most interesting changes as well as greatest impact on the health care system takes place.

Standardization and consolidation is needed in Japan as elsewhere and open standards may be a way forward.

Six implications for Sweden and for future studies: 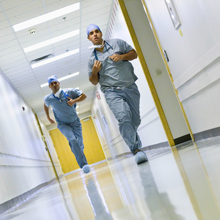