An analysis for a stronger collaboration with India in research, education and innovation

There are many good examples of valuable collaborations and cooperation’s within research, education and innovation between Sweden and India. This report aims to analyze how these can be strengthened and developed further as well as how new one can be created. The distance – geographically, culturally as well as with regard to organization – between Sweden and India can sometimes be large and the focus of this report is on the identification of gaps and how these could be bridged in the best way.

Although India is a uniquely important partner for Sweden for a number of reasons, it does not, at present, get as much attention as China. This may in the long run, from a Swedish point of view, become a problem. While China is bigger than India in most ways - more patents, a higher number of researchers and a better infrastructure – it is fundamentally different from India (1) and therefore plays another role as a collaborative partner to Sweden. In a simplified way China can be thought of as having a directed developmental model while India stands for a more improvised one. Collaborations with China require planning and structure while collaborations with India is more dependent on sensitivity, responsiveness and flexibility. Swedish collaborations with China can reach its goals while collaborations with India may reach unexpected results. Both types of collaborations and cooperation’s are important to Sweden. Therefore our conclusions are primarily focused on how to increase the Swedish flexibility to allow initiatives in collaborations, rather than on strict planning and resource setting.

Collaborations and cooperation’s are, from an innovation perspective, door openers to the Indian market for Swedish companies. From and educational point of view, Swedish research and educational environments benefit from exchanges and from a research perspective collaborations are important to ensure that Swedish scientists have possibilities to collaborate with the best Indian research establishments. In addition, it is difficult to efficiently address global and research dependent challenges such as climate change, poverty and biodiversity without the large and populous India. In the short- and medium-term perspectives educational and innovation collaborations and cooperation’s with India appear to be most important. However, in a longer time frame India will most likely belong to the world’s leading scientific nations. It is therefore of great importance that Sweden already now positions itself in the Indian research and innovation landscape.

Indian research, innovation and development evolve quickly and forcefully. It is driven forward by a conscious effort by the state to invest in research and innovation as well as by the private sector including some R&D-intense multinational corporations. The Indian R&D-landscape differs from its Swedish counterpart primarily in that public investors direct and prioritize harder and by the large proportion of research being performed in research institutes outside the universities. Furthermore, it is in India further between intentions and published strategies on one hand and operational implementation on the other.

The exchange between Sweden and India has increased steadily over the years and has picked up speed since the early 2000s. The exception to the rule is education where the introduction of tuition fees at Swedish universities has resulted in a marked decline in the number of Indian students in Sweden. A new model is most likely required to increase the exchange in this area.

An analysis of bilateral and multilateral research publications with Indian and Swedish coauthors show a large proportion of researchers with typical Indian names in both countries. This may indicate that many of the published articles are results of international researcher and student mobility. In this context it should be remarked that the degree of organization and resources committed for international collaborations in research and education varies significantly in between Swedish universities. A trend, however, is that more and more Swedish universities deal with international questions in a professional and well organized manner. Considering the introduction of tuition fees for students from outside the EU this is also likely to be a necessary condition for student mobility.

Swedish authorities are currently engaged in five Memorandums of Understanding (MoU) relating to research, development and innovation within fields such as for environment, health and energy. A collective experience from the activities is the challenge in matching a Swedish “bottom up” focused model for financing and steering with the Indian model which is more dominated by “top-down” approaches (2). This may lead to a strong demand on resources and that it sometimes is complicated to make the agreements operational. However, many of the Swedish universities underline that formal agreements appear to be important, not least for the Indian partners. Swedish public research funders have not - with the exception of Vinnova – made any major directed calls towards India. In this the Swedish strategy for collaboration differs from for example the British, German or French approaches where broad collaborations are mixed with directed calls made by private (e.g. foundations and charities) as well as public funders (e.g. government authorities, research councils).

India is an increasingly important destination for Swedish companies when it comes to research, development and innovation, and a strong motivational force is the proximity of the growing domestic market. Such proximity allows product development close to market but there are also examples in which Swedish companies in India develop products for a world market – in particular within ITrelated services. Indian and Swedish companies have so far not been involved in the formal MoUs in any major ways but there is an interest in that they should become more proactive and pull financially as well politically. An interesting – but still marginal – development is that Indian companies, in particular within the life sciences, invest in Swedish research. A broader trend is that Indian multinational corporations acquire R&D resources in other countries. An example is Aditys Birla Groups purchase of the Swedish paper and pulp company Domsjö.

An improved and strengthened collaboration and cooperation between Swedish and Indian organizations in the short and long term is desirable for the above and other reasons. At the same time the obvious should not be forgotten – that the final results of collaborations to a very large degree are dependent on the resources and motivation of the research and development performers themselves. Within some well-defined areas – for instance with clear connections to societal challenges or trade promotion – strategic initiatives and calls from the states may be necessary. In other cases, such as for long-term basic research the most important actions may be to remove obstacles for collaborations by for instance a larger proportion of international research funding or by the removal or reduction of administrative barriers for mobility. However, in some cases it may be of interest with bilateral calls for proposals with partners, also for basic research. Furthermore, it should be discussed if earmarking of some research funding for international collaborations with organizations in prioritized countries is needed. It is likely that the need is greatest concerning countries, such as India, with which the collaborations and corporations still are relatively undeveloped. The need for actions is dependent on the objective of the research or innovation but in general an increased collaboration with Indian actors as well as resources for this is seen as important.

This report demonstrates a number of critical connections for research, development and innovation collaborations with India as well as a number of strategic actions from which a stronger framework could emanate.

The mobility of researchers and students is central for collaborations and is dependent on funding opportunities and the attractiveness of Swedish universities. Such mobility is however hampered by administrative barriers. We propose the following:

The funding of research and innovation collaborations is a corner stone for such activities. There is room for a strengthening of the funding situation primarily by organizational measures. The following measures are suggested:

The organization of efforts to reconcile the Indian and Swedish systems demands resources and knowledge among government authorities as well as universities. We therefore suggest:

(1) For an insightful comparison see Harvard professor Taru Khanna´s book ”Billions of Entrepreneurs: How China and India Are Reshaping Their Futures –and Yours” (HBSP 2007).

(2) By ”bottom-up” is meant a model characterized by strong components of investigator-led research, distributed steering and a relatively small central control. This model should be compared to a more centralized model characterized by a greater degree of control of priorities and mechanisms from the political level and/or from government authorities (”top-down”). 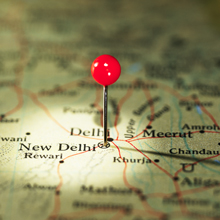 An analysis for a stronger collaboration with India in research, education and innovation