– A description of Swedish urban areas and their opportunities for growth

The purpose of this report is to devise an analytical structure to be able to study and analyse urban areas, the intraregional differences between urban and rural areas, and different types of urban areas.

Urban development has come to be an increasingly important element in growth policy. For example, the European Commission’s Cohesion Policy clearly recognizes urban areas as growth engines and has called for an urban policy agenda. Urban areas, however, can have vastly different characteristics, opportunities and needs. So-called “one-size-fits-all” policies are in many cases not appropriate. Consequently, there is a growing demand for “place-based” policies and therefore  a better understanding of different kinds of  urban areas.

Previous research has often focused on metropolises and megacities and paid little attention to small and medium-sized urban areas. Sweden, like many other countries, has few megacities but many small and medium-sized towns and cities. With respect to land area, Sweden is the third largest county in the EU but has the second lowest population density. Many urban areas in Sweden can therefore be characterized as “isolated” because they are a long way from neighbouring urban areas. It is therefore very important to get a deeper understanding of urban areas in Sweden and their functions as engines of growth.

The report consists of three main parts. The first part consists of a brief literature review and discusses the interrelationships between cities and rural areas, as well as the role of urban areas’ as regional and national growth engines. Urban areas can be described as centres of commerce, culture and learning, which in effect give agglomeration economies. This also has the consequence that certain industry sectors only develop, or develop better, in towns or cities. An important message from this part of the report is also that it is not only big cities that innovate, but rather that the characteristics of innovation vary between large and small urban areas.

The second part of the report creates an analytical structure to  analyse urban areas. The analytical structure makes it possible to study intraregional differences between urban and rural areas, as well as variations between different urban areas. The analytical structure is based on the idea that  urban areas constitute a  centre for a surrounding rural area. The definition of  urban areas is based on a functional approach and consists of three main levels: localities (tätorter), urban areas (tätortsområden) and urban networks (nätverk). The definition has been constructed with the help of a Geographic Information System (GIS) and calculations of geographical accessibility, as well as population statistics geographically linked to a nationwide grid of 500x500metre squares.

According to Growth Analysis’ definition Sweden has 221 towns and cities (urban areas). In 2009, 81% of the population lived in an urban area. Like many other countries, Sweden has many small towns but few large cities. Larger, more densely populated cities are generally associated with a higher labour productivity than smaller, less densely populated towns. However, the smaller towns exhibit a large variation in  labour productivity and some of  the smallest towns have some of the highest  labour productivity values. Large cities in general have a more specialized service sector, a larger diversification of industry sectors and a workforce with a higher level of formal education than smaller urban areas. These results imply that some industry sectors only develop, or develop better, in large urban areas. This is especially evident in the service sector. In order for the service sector to grow and develop successfully, it is important not to prevent agglomeration. The development of the service sector in big cities would not be at the expense of its development in small towns or rural areas, since it is not possible for specialized services to be developed in these areas.

The results in the report are in  accordance with previous research and imply that it is important not to prevent agglomerations and that urban areas should be encouraged to take advantage of their comparative advantage. However, an increased specialization could, in especially small urban areas, also imply an enhanced risk and vulnerability. An important question is therefore how to manage the risks associated with specialization. 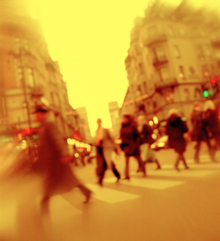