– Sweden in an international comparison

The Swedish Agency for Growth Policy Analysis has been commissioned by the Government to examine which regulatory areas, and where in the application of these regulations, growth-inhibiting factors for small and medium companies can be found. A departure point for this work has been those regulatory areas that are deemed to have significance for companies' growth and that can impact companies, primarily for investments or entry barriers to markets. Another has been the international investigations into this area, in order to gain knowledge on how Sweden differs in comparison to other countries and the consequences that may result with regard to company growth.

This study is mainly based on international comparisons and measurements of the regulatory burden or barriers to business and entrepreneurship, along with research and studies that draw from such data sources. In the study, an analysis is conducted of OECD's indicators for product, service market and labour market regulations as well as the World Bank's index, Cost of Doing Business. We also study two broader indexes of economic freedom along with Indicators for Entrepreneurship Framework Conditions. An advantage of these indexes is partly that they allow analyses of different dimensions and also that they are objective, unlike indicator systems based on subjective perceptions or assessments. Differences over time and between countries can therefore be traced to changes in the regulations or in the institutional framework conditions, and not to changes in subjective perceptions.

As the starting point in the studies is regulatory areas that have significance for company growth, particular focus has been devoted to highlighting possible correlations between fast-growing companies (High Growth Firms, HGF) and regulations. Several studies show that HGF are very important for economic growth and job creation. It can be assumed that the regulatory burden affects potential HGFs relatively more than companies that exhibit marginal or no growth.

It is important to emphasize that certain types of regulations are very important for business conditions and development potential, and that well-functioning institutions of this kind play a crucial role in creating economic growth. Regulation are needed to create stability and endow the market with rules-of-play by which the right to private ownership of property, including the basic economic freedoms such as the right of disposition, freedom of contract and the right to return on assets, is the most economically fundamental institution. Regulations of this kind can be said to be efficient and lead to an efficient allocation of resources in society. For the same reasons, regulations and public intervention can be justified when there is market failure. Traditionally, economists usually specify four types of market failure. These are public goods, externalities, information asymmetries and natural monopolies or market power.

Several studies and research confirm that the regulatory burden has negative effects on entrepreneurship, business dynamics, productivity and economic growth. A review of different measurements of the regulatory burden and the scope and design of regulations and rule of law shows that Sweden is comparatively successful by international standards. Additional studies confirm that abolished or reduced entry barriers for new companies, anticompetitive regulations and entry barriers within the network sectors, retail and market services, is one of the policies that clearly favours productivity development and economic growth. In these respects, Sweden is in a very good position, and this has paid off in terms of higher economic growth compared with several other OECD countries in recent years. Calculations indicate that the deregulation of the network sectors during the 1990s alone has increased the growth of labour productivity in Sweden by approximately 0.4 percentage points per annum.

Sweden still has a high tax burden and high income and capital taxes compared with several other countries, even if the taxes have been significantly reduced during the last two decades. Public spending is currently approximately ten percentage points lower than it was in the 1990s and the tax ratio has been reduced from approximately 52 per cent of the GDP to approximately 44 per cent in 2011. Based on the research, it is estimated that a ten percentage points lower tax or spending ratio means a higher annual growth of 0.5-1 percentage point, which is a relatively large effect. Sweden has also implemented a series of reforms that have increased the economic freedom more than almost all other comparable countries, as well as increased the profitability of working, attaining education and running companies, which has also contributed to a strong economic development. It should, however, be emphasized that it is the design of the tax system and how the taxes are utilized that are the determining factors. In addition, taxes are used for public investments such as education and infrastructure which can be expected to have a positive impact on economic growth.

The opening up of markets for domestic competition and international trade and the removal or reduction of entry barriers are therefore favourable for entrepreneurship, productivity development and economic growth. The most restrictive entry barrier is public monopoly, where the market is completely closed to private firms. Sweden has also exposed to competition a large number of services that were previously financed and produced by the State, such as schools, healthcare and social care. Public procurement is around SEK 500 billion annually and can be strengthened in terms of public competence and monitoring.

There are other specific dimensions where Sweden can be judged worse by international comparison. One such area is the extent of public ownership of companies at different levels.  In many cases, there is no economic reason for the Government to own companies in competitive markets. This involvement reduces market effectiveness through disrupting the competitive situation and can result in a reduction of entrepreneurship and the entrance of potential competitors. Stateowned companies often have privileged access to essential infrastructure.

From an economic viewpoint Sweden should continue in the same direction with additional exposure to competition, and sale of state-owned companies that operate in competitive markets and where reasons for ownership involvement are lacking. It is also important that public procurement is developed with regard to aspects such as contract design, monitoring and control. With an improved procurement process and more competitive mechanisms, the discussion on different modes of operation and profit become less relevant, as this development would result in operations and companies that are underperforming or charge excessive prices being replaced by other, more effective companies. Thus, efficiency in the public sector would increase where entrepreneurship and growing companies would benefit.

Another area is labour market regulations that, however, significantly differ between permanent and temporary positions. As a result, Sweden has highly differentiated employee protection where different groups enjoy different levels of protection with the paradoxical effect that the most vulnerable groups have the least protection. For the upper segment of the labour market, consisting of the permanently employed, it means the Employment Protection Act also reduces incentives and creates barriers to external labour exchange. It should be noted that it is primarily the seniority principle in the law's sequence regulations for termination that apply. Temporary employment is an alternative to permanent employment, but these factors in the legislation creates frictions that have a negative impact on companies' ability to adapt to external changes and productivity. It can be expected that companies with strong growth and companies that need to quickly change the composition of their workforce are affected more adversely than other companies. This is problematic, as the fast-growing companies account for the bulk of job creation and economic growth.

The report can be summarized with the following conclusions: 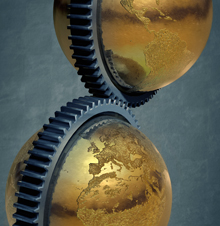 Regulatory burden and growing companies – Sweden in an international comparison