– An analysis of the deregulation of the pharmacy market – Final Report

Growth Analysis has made an analysis of geographical accessibility to medicines. From available statistics it is clear that the pharmacy reform has led to a large number of new pharmacies being established. In September 2012, there were 1,254 approved pharmacies in Sweden, which is an increase of 330 pharmacies, or approximately 36 percent, since the reform was introduced in 2009. 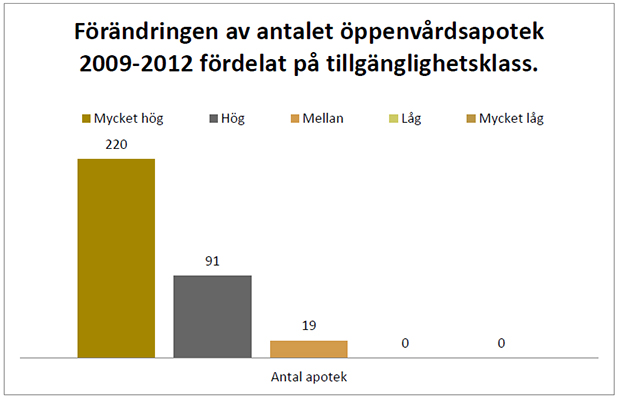 When the reform was introduced, both purchasers of state pharmacies and Apoteket AB were given responsibility to ensure coverage in sparsely populated areas. The players were obliged through an agreement with the state to continue to run some hundred specified pharmacies in sparsely populated areas for three years without special compensation. The agreements with the pharmacy owners will expire at the beginning of February 2013.

Accessibility, measured as proximity to the nearest pharmacy, has improved from a national perspective since the introduction of the pharmacy reform. This improvement in accessibility mainly concerns residents in areas with very high or high accessibility to localities, i.e. those areas where most of the new pharmacies have been opened. In areas with low or very low accessibility to localities, the number of people with more than 30 minutes to the nearest pharmacy is also smaller. This change is explained by demographic factors, i.e. a smaller population in the areas concerned.

The average distance between pharmacies fell in all counties between 2009 and 2012. In large parts of Sweden, however, it is a long way to the second nearest pharmacy and consumers in these areas therefore have no real possibility to choose where to make their purchases. In addition, the structure is vulnerable since travelling time would increase significantly for many people if their nearest pharmacy closed.

Growth Analysis has also analysed which places have both a healthcare centre and a pharmacy. The analyses have shown that there are 13 healthcare centres where the pharmacy is more than 20 minutes away by car.

Accessibility to non-prescription medicines has increased markedly since their sale became permissible outside of pharmacies. These retailers are well dispersed across the country, but close to half of them have been established in areas with a very high accessibility to localities. Just over 4 percent of the new retailers selling non-prescription medicines have been established in areas with low or very low accessibility to localities.

Approximately 68,000 people now have to travel further to their nearest retailer of non-prescription medicines (OTC - Over-the-counter), despite the significant increase in the number of retailers. This change is a result of pharmacy representatives leaving the areas concerned and no new OTC retailers being established in the local area. The development is therefore probably independent of the pharmacy regulations.

The pharmacy representatives have great significance for accessibility to medicines, especially in sparsely populated and rural areas where it is a long way to the nearest pharmacy and where there may be no other retailers of non-prescription medicines.

With the exception of Kronans Droghandel, the private chains have a stronger profile in areas with very high accessibility to localities than Apoteket AB. Apoteket Hjärtat and Kronans Droghandel are the only players to have pharmacies in all index classes. Apoteket AB has retained roughly the same geographical location pattern in relative terms between 2009 and 2012. 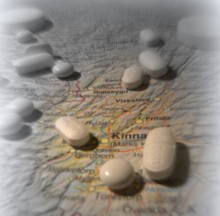