Development of the cost of pharmaceuticals in the deregulated pharmacy market

According to Government Bill 2008/09:145, the purpose of the deregulation is to give consumers greater accessibility to medicines, better service and supply of services, and lower costs for their medicine. The pharmacy market was principally deregulated in two stages; on 1 July 2009, Apoteket AB lost its monopoly on retail selling of medicines and approximately two thirds of the then existing pharmacies have been sold to new owners. From 1 November 2009, other players in the retail trade have also been allowed to sell certain non-prescription medicines. The pricing model for medicines with generic competition was reformed in several steps during 2009/2010. Among others, ceiling prices were introduced and the pharmacies had to sell the most inexpensive medicinal product on the market in a specific substitution group. At the same time, the margin for pharmacies was reinforced.

The focus of this study has been on assessing the impact of a number of rule changes in the submarket for medicines with generic competition, which were introduced with the purpose of improving the way the market functions and increasing the degree of generic substitution.

In order to estimate the total impact of the reform, however, both impact on prices and composition effects must be taken into account, as a result of the increase in proportion of sales of products with the lowest price (product of the month) and the value of the substitution groups. The development of cost per prescribed daily dosage per medicine is there-fore analyzed. This measure gives an estimate of the consequences for society as regards costs.

The estimate of the cost per daily dosage has fallen as a result of the reform. The reduction in cost is estimated at approximately 10% measured in AUP and approximately 30% measured in AIP. The larger decrease in the case of AIP is explained partly by the pharmacies’ marginal strengthening and the fact that a percentage price reduction in AIP gives a lower percentage decrease in AUP due to the price-dependent components in the pharmacies’ established sales margin. The cost decreases in terms of AUP are totally due to the lower price ceilings introduced in summer 2009. Were it not for this measure, the cost per daily dosage expressed in AUP would have on the contrary increased somewhat. Our findings also indicate that the cost decreases would have been greater if the new rules had not affected the number of companies with sales in the respective substitute group. Greater compliance seems to have led to fewer companies competing, which has counteracted the cost-lowering effect of greater compliance.

The rate of increase in the prices of non-prescription medicines according to the pharma-ceutical price index (LMPI) was somewhat higher than inflation measured as CPI between January 2008 and October 2012. The LMPI has increased by approximately 8.5 per cent and the CPI by approximately seven per cent over the period. The pharmaceutical price index, however, increased relatively more up to the beginning of 2010 while the CPI has risen more than the LMPI since then. In other words, the LMPI increased primarily before Apoteket AB began to meet real competition but the rate of increase has slowed since then.

330 new pharmacies have opened since the deregulation in 2009, which is equivalent to approximately 36 per cent. Average pharmacy density, i.e. the number of inhabitants per pharmacy, was the second worst in Europe after densely populated Denmark. In September 2012, pharmacy density was approximately 7,600 inhabitants per pharmacy, compared with 10,050 in July 2009. Pharmacy density has thus increased considerably in Sweden since the pharmacy reform, even if there are some regional differences. This means that the vast majority of Swedish consumers now enjoy very high or high accessibility to pharmacies while the situation remains unchanged in areas characterized by low or very low accessibility. As regards accessibility to non-prescription medicines, this has probably improved considerably as a consequence of the large number of other sales points, which total some 6,000. In conclusion it should be mentioned that the pharmacies’ opening hours have increased from an average of 42 to 53 hours/week.

Greater accessibility and more hours open drive costs but at the same time have a value for consumers. In the opinion of Growth Analysis this more than compensates for the fact that non-prescription medicines have not become cheaper but prices have largely followed inflation. Consumer preferences and values should be considered since they account for the total cost of non-prescription medicines. On the other hand, this does not apply to the generics market, where society primarily bears the cost of the pharmaceuticals benefits scheme, which amounts to over SEK 24 billion annually. In this market it is therefore important that costs be kept under control since it is a matter of third-payer financing.

The reform lowers the costs for the benefits scheme at the same time as the marginal reinforcement affects profitability and in the long run the number of pharmacies. On the other hand, the total volume of medicines sold remains relatively unchanged, which means that the increase in the number of pharmacies and other sales points is leading to a lower volume per pharmacy. It should be pointed out that the period studied is relatively short. What will happen as regards prices and costs, accessibility and number of pharmacies depends on how profitability develops as time goes on. The current situation is therefore liable to change until a long-term equilibrium has been established. The objectives of the deregulation as regards greater accessibility and continuing low pharmaceutical costs, however, can be considered to have been attained at the present time. 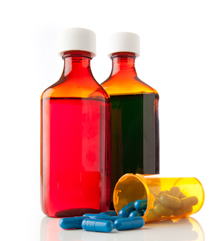 Development of the cost of pharmaceuticals in the deregulated pharmacy market