The regulatory burden and administrative costs in the restaurant industry would also decrease through a harmonised VAT rate on food to take out, serving and other provisions. Growth Analysis was commissioned by the government to examine the development of enterprise in different dimensions and the effects on regulatory burden that the reform involves.

To date, the findings from the evaluation show strong indications that the companies in the industry have used the lower VAT rate in different ways. The companies show stronger development than in previous years as regards both payroll expenses, numbers of employees and operating margins. At the same time, the number of firms leaving the industry has fallen and the number of start-ups has increased, which has led to a net increase in the total number of firms during 2012. Finally, the reforms aimed at the industry in recent years have not in total resulted in lower direct regulatory costs for the companies.

All the studies covered in the report indicate that the reduction in VAT has had an impact on the industry, in particular in respect of payroll expenses, numbers of employees and quality improvements. Payroll expenses and turnover in the industry are on average significantly higher after January 2012 than before. This does not necessarily mean that the reduced VAT rate is the cause of the increase, but it seems likely that this is the case since neither the economy nor households’ disposable income has grown more during this period than previous periods. We cannot, however, say how much of these changes can be attributed to the lower VAT rate and how much is due to other factors because we do not as yet have adequate comparative control groups.

The evaluation strategy developed by Growth Analysis is based on a number of different studies which together make up a chain of evidence that will give answers to or indications of the effects of the VAT reduction on the basis of three essential questions: the compa­nies’ development before and after the reduction, how the number of companies has changed, and the impact on rule simplification.

Strictly speaking, it is not possible to make a general impact valuation of lower VAT on restaurant and catering services using conventional methods or approaches since there is no natural control group because the VAT reduction applies to every company in the industry.

As the work continues, we will further develop the approach above with analyses based on a so called synthetic control group. Growth Analysis will also identify employment flows between the restaurant and catering industry and other industries. Analyses of the development of the companies’ profitability and other key ratios will also be made and the results presented in the final report. 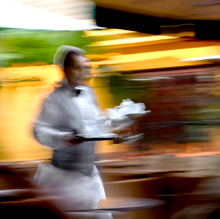