The significance of policy instruments for the greening of industry

– a case study of the Swedish forest industry

In order for the government’s environmental and climate policy objectives to be attained in parallel with positive economic development, a greening of industry is needed. This study is one of the assignments carried out within the framework of Growth Analysis’ commission from the government entitled “Förutsättningar för grön strukturomvandling” [Prerequisites for Green Structural Change].

The aim of the study is to seek knowledge and draw conclusions about the policy’s importance and possibilities to drive development towards a more sustainable yet at the same time competitive industry on the basis of a case study of the Swedish forest industry. What effect have the environmental and climate policy instruments had on the forest industry? What role have the policy instruments played relative to external factors? How have the companies acted on the policy instruments and what have their measures resulted in? On the basis of the companies’ responses to these questions, the aim is to draw more general conclusions and to learn lessons of relevance to the design of a policy for a greening of industry.

From having been a serious polluter, the Swedish forest industry has become a largely sustainable industry. This transition has largely taken place since the early 1970s. The forest industry has substantially reduced its carbon dioxide emissions in parallel with positive economic development. Many of the forest industry’s plants and facilities are today climate neutral with the exception of its industry-related transportation.

The forest industry’s development in this respect is in clear contrast with development in other sectors of industry where the substantial reductions in emissions (in absolute terms) since the 1970s came to a halt after 1990. Even though carbon dioxide productivity is increasing all the time, it has not resulted in an absolute reduction in emissions since 1993. On the contrary, carbon dioxide emissions increased during the whole of the 1990s and have remained largely unchanged over the past decade. Only 20% of Sweden’s economic growth since 1993 is attributable to sectors that have at the same time reduced their emissions, or in other words seen what we call green growth.

The policy has been of crucial importance for initiating and driving the greening of the forest industry. By far its most important contribution, according to both research literature and the interview study, was the introduction of environmental legislation in 1969 with its requirement for individual licences. These regulatory policy instruments initiated a challenging and extensive transition in the forest industry. Another clear, and unanimous, conclusion is that the application of the policy instruments is of crucial importance. Success criteria that are emphasised include clearly defined binding goals, flexible implementation and a competent, solution-oriented dialogue between the industry and the regulatory authorities.

Further policy instruments and instruments with a clear climate policy focus have been introduced since 1990, the most important being the Programme for Energy Efficiency (PFE), trade in electricity certificates, the carbon dioxide tax and the EU’s Emissions Trading Scheme (EU ETS).

The PFE is highlighted in both the research literature and interviews as a policy instrument that has led companies to seek and identify ways to make their production more energy-efficient. Other studies, however, have drawn the conclusion that the PFE has been neither effective nor cost-efficient.

Once they had been extended to cover a longer period, the green certificates have been a significant factor in increased use of bio-fuels. This has been very positive for the forest industry, which is a major net recipient of certificates. In the literature, however, the green certificate system is criticised for not having led to technological development or green entrepreneurship but rather having favoured existing technology and players instead.

The forest industry has primarily acted on the more stringent environmental requirements by switching from fossil fuels to bio-fuels and electricity. In addition to this, greater carbon dioxide productivity has been achieved through a series of changes aimed at increasing energy and resource efficiency. Much of the technological development has taken place through the reuse of existing technology adapted to new contexts rather than genuinely new technology.

There are several conceivable reasons for major innovations having been relatively few. One is that the forest industry is capital intensive and that new technology is expensive to develop and entails major investments. Another is that investors have been unwilling to consider commercialisation of technology in the forest industry, partly due to the sector’s rules of play being perceived as unpredictable. Moreover, the sector has been dominated by a few established players – which in itself may have prevented new technological solutions being developed.

The transition has meant that the Swedish forest industry is today one of the most resource-efficient in the world, which is an important competitive advantage. This has taken place in parallel with environmental requirements both in Sweden and around the world becoming of increasing importance, which has led to a change in norms. One example of this is that various kinds of sustainability certification have come to be more or less standard in the industry and the players see the products’ environmental adaptation as an important part of their offering to customers and consumers. 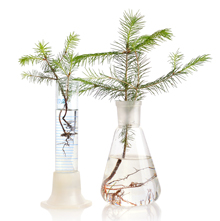