Effects of publically funded support for the internationalisation of SMEs

– development of measurement methods and indicators

The Swedish government has asked the Swedish Agency for Growth Policy Analysis, Growth Analysis, to develop methods and indicators to measure the effects of public support to promote the internationalisation of small and medium sized enterprises (SMEs), trade promotion.

The Swedish government has asked the Swedish Agency for Growth Policy Analysis, Growth Analysis, to develop methods and indicators to measure the effects of public support to promote the internationalisation of small and medium sized enterprises (SMEs), trade promotion. In 2013 the Swedish National Audit Office issued an audit report, Heading out into the world – the state's initiatives for promoting export, that concluded the government lacks a method to assess the impact of trade promotion services on firms specifically, and on Sweden’s national welfare generally. Examining and evaluating the impacts of trade promotion is important as the services entail costs for society. Growth Analysis is working on developing methods to assess the impacts of trade promotion services within the categories, advisory services and marketing support.

Based on what we have found in this report, three main conclusions can be drawn about the Swedish trade promotion system. These conclusions will affect our continued work in developing methods and indicators to measure its effects: (i) the system is complex and includes a large number of organisations and a wide variety of services, (ii) the goals for trade promotion are unclear – both in regards to the system as a whole and in regards to services offered by individual organisations, and (iii) data registration is inadequate.

(iii) Growth Analysis was unable to determine how many unique SMEs utilise the different trade promotion services annually because a number of the organisations offering services do not keep complete records of which firms have used their services; which types of services they have used; or, when they used them. This information is, however, registered in cases when financial support is given to SMEs as part of trade promotion services or when SMEs are invoiced for using such services. Support for export and international trade is included as an optional component in a number of general support programmes for SMEs. Consequently, Growth Analysis has to underestimate the extent of public trade promotion support given to SMEs.

A number of studies of the different Swedish publicly funded trade promotion services have been conducted. None of these studies (with one possible exception) can be classed as evaluations, but are rather monitoring studies. Surveys or questionnaires are the main methodology used in these studies. They may be useful for the organisations providing services to SMEs to follow up on firms’ satisfaction with the services they have provided; additionally the studies may be utilised for internal planning purposes. They are not, however, appropriate for measuring the direct impacts of the services used. By direct impacts we mean whether the services have contributed to the internationalisation of firms using them. One reason for this is that it is not possible for respondents to know what would have happened if they had not used the services. Respondents are also generally predisposed to being pleased with a service that is cost free, or which has been subsidised.

Quantitative evaluation methods have been used to measure the direct impacts of publicly funded trade promotion services in Denmark, Finland, Norway and the United Kingdom. Those methods have been instructive, and have informed our work in developing methods to use in Sweden. Growth Analysis has not identified any European studies that have attempted to quantify how trade promotion services affect a nation’s general welfare. Based on Growth Analysis’ analysis, we see serious methodological problems associated with measuring such welfare effects.

The direction of the methodology development

In our continued work with this government assignment, Growth Analysis will focus on the direct impacts (internationalisation of SMEs) of trade promotion services within the categories, advisory services and marketing support. In our view, there is potential to develop a generic method for measuring the impacts of these services. Services within these categories include two-way communication and activities carried out in partnership, such as business plan development, market selection analyses, trade delegations, match-making and official contacts.

The impacts of trade promotion can be defined as the difference between how firms that have used services have internationalised their businesses (using a number of indicators or variables) as compared to what would have happened in this context if they had not used the services, i.e. in a contrafactual situation. To accomplish this, we will compare firms that have used services (treatment group) with firms that have similar characteristics, but have not used these services (control group). To minimise the risk that factors other than the trade promotion services have impacted upon the firms’ internationalisation, we will match the firms in the treatment group with firms that are as similar as possible in the control group, with respect to a number of observable characteristics.

Nonetheless, firms that have used trade promotion services may have some unobservable characteristics that impact upon their internationalisation that differ from the firms in the control group. Management’s ambition and competence are such unobservable characteristics. As a result, there is some remaining difficulty in determining causality using the method described. Therefore, we are also developing a complementary qualitative method to study what significance publically funded trade promotion services have had for those firms that began to export to a given market during a given period.

To enable further evaluation of publically-funded trade promotion services, Growth Analysis has developed the following two recommendations: 1.) The government should develop and agree upon measurable goals for trade promotion 2.) Organisations offering services and their intermediaries should keep a full digital record of which firms use their services, including firms’ tax numbers, the type of services used, and when they were used. 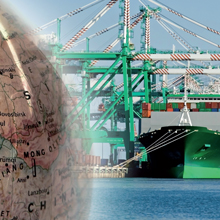