– Changing roles of firms in an increasingly globalized economy

Swedish firms have this far successfully integrated into global value chains. Just like with all other structural transformations, both possibilities and challenges arise. When production processes that were previously co-located in Sweden are divided up and spread over several countries, it entails a structural transformation with ramifications on jobs and which is not easily captured in existing economic statistics.

The aim of this report is to specify the new terrain of Swedish firms and to discuss how this can be reflected in a map of future policies for economic growth. The report summarises various studies of global value chains and their impact on Sweden’s economy.

An initial finding is that the increased participation in global value chains means that the total value of Swedish exports has increased, but that a smaller part of the value originates from Sweden. This means that Sweden’s economy has grown increasingly interdependent with the economies of other countries for maintaining its competitiveness. One consequence is that trade in input goods has become more important for our competitiveness; we no longer just need to be able to export, but also effectively import to strengthen our competitiveness. Hence, we are dependent on how well companies in other countries work in order for Swedish jobs and companies to develop.

Another finding is that Sweden’s economy has successfully utilised the possibilities that participation in global value chains entails. We see that the global value chain activities that are placed in Sweden are to a growing extent the most value-generating stages that are at the beginning or the end of the value chain, such as research and development, design, logistics and marketing. Sweden’s economy has become more specialised on activities that involve highly skilled work.

At the same time that research and development has become more central to Swedish competitiveness, it has become more difficult to understand and analyse a Swedish innovation system where industries and individual companies are difficult to define nationally. It is no longer enough to think that what is good for Volvo is good for Sweden. One challenge is to develop an approach to innovation and economic policy that is not based on assumptions that the companies and industries are national; it is what happens in Sweden that is of interest, rather than who owns the companies.

An increased connectedness to global value chains has changed the kind of jobs and regions that contribute the most to value that is created in Sweden.

Furthermore, an analysis of Swedish competitiveness looks significantly different depending on whether competitiveness is measured from a GVC or a gross exports perspective. These observations impress the importance of not thinking about competitiveness in terms of ready categories (for instance small and big firms, services and manufacturing, new industrialization or de industrialization) when seeking to understand an economy in which firms are well connected to global value chains.

There are no simple policy recommendations relating to the increasing engagement with global value chains. Growth Analysis has argued that growth and innovation policy should be formulated to allow for combinations of actions (a policymix) that can strengthen Swedish positions. As a consequence of the increased interdependence of economic activities, there is a need to think of growth policy in a way that cuts across firm- and government departmental organizational boundaries. There is a need to enhance current growth policy with respect to the framework conditions for investments in knowledge, entrepreneurship and competence development. Important elements are investments in research and development, regulatory systems that encourage innovative firms as well as a strategy for promotion in the fast growing markets outside of Europe.

The principle of safeguarding the individual, and not the company, is probably highly relevant today, but with some differences compared with earlier structural transformations. In terms of the labour market, the challenge is not mainly a geographic relocation, but rather an upgrade of competence levels to meet the change in demand. Financially, the challenge is to maintain a functional transformation protection in an environment where companies are becoming increasingly mobile across national borders.

In addition to this, there are also other issues that need to be investigated further over the next few years:

What is the connection between research and development and manufacturing?

Globalisation of research and development

Where will the jobs disappear to: another country or automation?

What does the creative destruction of the future look like and will our social safety nets hold? 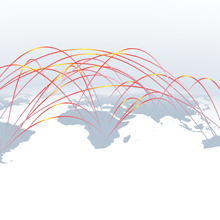