Effects of publicly funded support for the internationalisation of SMEs

To create an effective trade promotion system that contributes to reaching the govern­ment’s growth policy goals it is essential to gather knowledge about the impacts of publicly funded promotion of the internationalisation of small and medium sized enter­prises (trade promotion). In this report, Growth Analysis suggests methods for valuating Swedish trade promotion. Our recommendations are based upon a review of the research literature from the disciplines of Business Administration and Economics as well as evaluations that have been conducted in a number of other countries. In addition, we propose several descriptive studies to further shed light on how the trade
promotion is used and which firms use the services.

The Swedish National Audit Office conducted a review of Sweden’s publicly funded trade promotion support in 2013. The review found that there is a lack of knowledge about both the impact of trade promotion on firms and about its national welfare effects. As a result, the government commissioned Growth Analysis to develop methods for evaluating the impacts of trade promotion. This fourth and final report within this commission synthesises the earlier reports.

Evaluation of effects at the firm level

A number of different government agencies and publicly funded organisations offer a broad and diverse range of trade promotion services. Growth Analysis has therefore concluded that it is not possible to evaluate the impacts of all types of services using one common method. Our focus has primarily been the impacts of trade promotion, within the categories of marketing and advisory services, at the firm level. These include activities such as business plan development, market selection analysis, trade delegations and matchmaking.

The evaluation method Growth Analysis recommends is a so-called counterfactual evaluation. This method involves estimating the level of internationalisation of firms that have used trade promotion services, as compared with what would have happened if they had not used the services. The counterfactual situation is approximated by a control group comprised of firms that have not used trade promotion services, but which otherwise resemble the firms being studied as regards, turnover, previous exports and number of employees. There are also a few ways to ensure that the firms in the control group are interested in internationalising their business.

It is necessary to use a control group to assess the impact of trade promotion services. If we were to only study firms that have used services we would not be able to ascertain to what extent an observed change in the firms’ exports is actually a result of having used the services. Such observed increases, or decreases, in export volumes could in fact be influenced by other factors, such as exchange rate fluctuations or the state of a trading partner’s economy.

There are many advantages to using official statistics to measure the effects on inter­nationalisation and export (the dependent variables of interest). We find survey-based studies to be inappropriate for this type of impact evaluation because of low response rates and response bias. Trade statistics and economic data on firms can be used both to study the impacts on the firms that have used promotion services, as well as to study the distribu­tional impacts among different classes of firms. Similarly, we can also study whether an observed increase in exports consists of an increase of existing export flows or if it instead consists of new exporting firms, new export products or new foreign markets. We reco­gnise, however, that it is difficult to measure other forms of internationalisation for which there are no official statistics, such as international cooperation and partnerships.

Analysis at the systemic level

Growth Analysis has commissioned a team of researchers to conduct a pilot study into how Swedish small and medium sized enterprises begin to export to complicated markets. The study indicates a possible discrepancy between the types of trade promotion services that the state offers and the types of support that firms require. This merits further study.

We also propose a number of descriptive studies to further shed light on how the trade promo­tion system is used, which foreign markets it is used on, and which firms and sectors of Swedish industry use, or do not use, it. The studies would also enable us to monitor how political priorities are reflected in trade promotion. Such descriptive work is especial­ly relevant as trade promotion services are selective instruments, in the sense that the services are not extended to, or used by, all firms.

The promotion system’s organisation – strategic choices in other countries

Growth Analysis has been commissioned to develop and propose methods to evaluate the impact of trade promotion services on Swedish SMEs. Impact evaluation does not, how­ever, address the question as to whether there are other, possibly more effective, ways to organise trade promotion. We believe this is an issue that merits further analysis.

While reviewing how other European countries evaluate their trade promotion we have observed that other countries have organised their trade promotion systems in different ways. We see three main themes. 1) Industry plays a greater role and has more influence in trade promotion activities in several countries, either by the chambers of commerce setting the agenda or through publicly funded organisations working as a broker for services offer­ed by private internationalisation consultants. 2) Some countries have increased coordina­tion of publicly funded actors at the regional level, for example by housing them together in regional business support hubs. 3) Finally, we have observed an example in which all publicly funded actors responsible for selective support to firms, including trade promo­tion, have been integrated into a single agency.

Growth Analysis recommends that preparation for an impact evaluation of trade promotion should begin as soon as possible. Not least as the internationalisation of small and medium sized enterprises is a current political priority. If future export strategies are to have the desired impact, it is essential that they are based upon knowledge and evidence of what impacts the instruments employed have. Such an impact evaluation requires, however, access to information on which firms use the different trade promotion services and when they have used them. Some actors can produce this data today while others must first review their customer management and data collection systems. 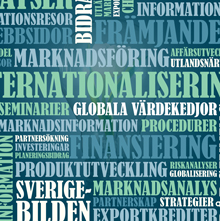