Accessibility to commercial and public service 2014

Analysis of trends in the different regions of Sweden

Growth Analysis has analysed trends concerning accessibility to a selected number of services during the last two years. Trends in the last few years have followed the same pattern as during preceding years: the number of permanent service facilities has decreased for most types of services. However, the deregulation of pharmacies and the choice of healthcare reforms have meant that the number of primary care pharmacies and health clinics has increased during the last five years which, from a national perspective, has led to improved accessibility to pharmaceuticals and health clinics.

The trend shows that the number of shops has continued to fall during the last two years. During the 2012–2014 period, the total number of grocery shops decreased by 2.8 %. The decrease between 2013 and 2014 was slightly smaller than the year before. Since 1996, the number of grocery shops in Sweden has gone down by almost 28 %. The number of commu­nities with only one shop has also decreased year by year. In 2014, there were just over 800 communities of that type, of which 100 were in areas with low accessibility to towns and 35 were in areas with very low accessibility to towns.

All types of areas have been affected by these changes but the greatest relative changes during the last decade have occurred in areas with medium and low accessibility to towns. During this period, the number of shops has decreased in all counties, the largest relative changes being in the counties of Jämtland and Gotland.

During the last decade, the network of fuel sales outlets has changed markedly. The largest oil companies have altered their network of fuel stations; less profitable sales outlets have either been turned into unmanned stations or closed. More than half of the fuel stations are now unmanned stations. At the same time, in many places, new local solutions have come about in order to meet people's service needs.

It is primarily small schools with fewer than 50 pupils that have decreased in number since 2013. Here, the decrease is larger than the change in the total number of schools because some of the larger schools have grown, either by schools being merged or because the number of pupils has increased.

The number of pharmacy representatives has decreased by 173 since 2009 and by 48 since September 2013.¹ The change since 2009 is the equivalent of a drop of just over 20 % in relative figures. Since 1999, the number of representatives has fallen from 963 to the current level, a decrease of almost 300 representatives or just over 31 % in relative terms. The main reason for the decrease is that the shops that had served as pharmacy represen­tatives have been closed and there has been no one else interested in taking over.

Accessibility, measured as proximity to the nearest pharmacy, has improved from a natio­nal perspective since the introduction of the pharmacy reform. It is mainly people living in areas with very high or high accessibility to towns who now enjoy improved accessibility but, in addition, the number of people who have to travel for at least 30 minutes to their closest pharmacy has decreased during the last five years.

There have been relatively small changes in the postal service network since 2012. During the two-year period, the number of postal service facilities went down by 40, which is a 2 % decrease. The changes are evenly distributed over the two years and also relatively evenly among the different accessibility categories.

On 1 January 2010, it became obligatory for county councils to apply the Act on System of Choice in the Public Sector (2008:962) within primary care which gave all patients the possi­bility to choose which health clinic they want to go to. Growth Analysis’ follow-up shows that the number of health clinics has increased considerably since 2007. The in­crease has mainly occurred in areas with high or very high accessibility to towns. 80 % of all health clinics are located in these areas. The greater number of health clinics is almost exclusively a result of an increase in private health clinics.

Figur 1  in the Swedish summary shows the population's accessibility to a selected number of services. The services included in this analysis are grocery shops, fuel stations, compulsory schools, pharmacies, and health clinics. The figure shows how many of these services are accessible within a 10-minute car journey for people living in different parts of the country. The orange areas show which people have access to four out of five of these services within 10 minutes; the light blue areas show those who have more than 10 minutes to all of the listed services. 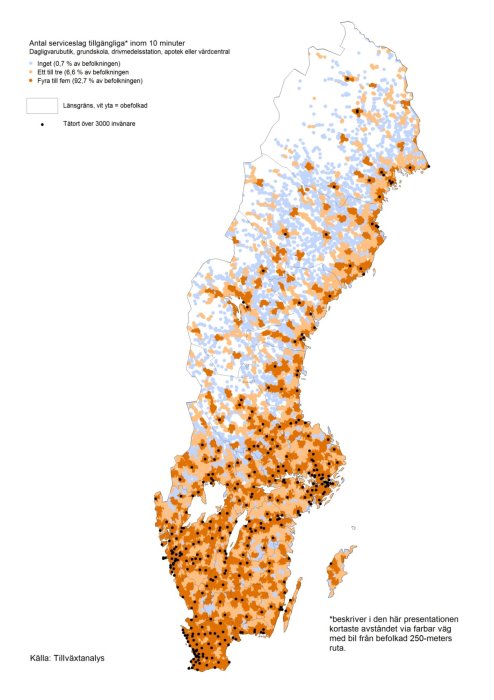 Figur 2 in the Swedish summary shows the gender and age distribution of the people who live in the areas with more than a 10-minute car journey to the nearest grocery shop, fuel station, compul­sory school, pharmacy and health clinic. (The light blue areas in Figur 1 above). 46 % of the people living in these areas are female while 54 % are male. 31 % of the population in these areas is aged 65 years or older.

¹ During the calendar year of 2014, the number of representatives fell by 23. 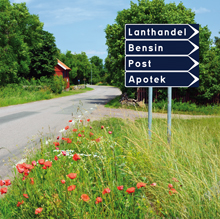