– indicators for the national innovation strategy

The purpose of the National Innovation Strategy is to meet the long term economic and social demands. Success in the global market is essential as Sweden is an export-dependent economy where roughly half of production is exported. An increasing part of the global production has moved from single firms and nations, to become dispersed across many firms and nations in what is called “Global Value Chains”. The national origin of products and even innovations has thus become increasingly blurred and more difficult to measure.

The Swedish Government has given The Swedish Agency for Growth Policy Analyses, Growth Analysis, an assignment to measure the Swedish innovation climate as well as the National Innovation Strategy that was launched in 2012. Growth Analyses first report was published in 2013 and covered a total of 29 indicators that align with the objectives defined in the strategy. The present report focuses on analysing the indicators updated during the course of 2014.

The aim of the strategy is to develop an innovation climate where Sweden can continue to be world leading. To accomplish this, obstacles to innovation need to be identified. The 2014 indicators highlight areas in which Sweden shows both strengths and weaknesses.

Weak areas that calls for attention are:

To safeguard the country’s innovation climate the following strong areas have been identified: 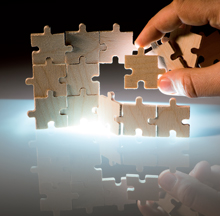