Our analysis of the effects of the reduction in VAT for restaurants and catering services indicates a positive outcome for employment, total wages and turnover. It is clear that firms have not only used the VAT reduction in order to lower prices since effects on gross profit and the net surplus of new firms can also be seen. Growth Analysis concludes that the lower VAT rate will have a long-term positive effect on employment.

The aim of the VAT reduction measure was to increase long-term employment in Sweden through an increase in both labour supply and the demand for restaurant and catering services. Growth Analysis was commissioned to evaluate the effects of this reform from the perspective of firms. The Swedish Tax Agency and the National Institute of Economic Research (NIER) were also commissioned to evaluate the reform from different perspec­tives.

Evaluating the effects of the VAT reduction is challenging from a methodological perspec­tive because of a lack of counterfactual outcomes, i.e. what would have happened in the absence of the reform. A reform such as a reduction in VAT that covers all businesses in an industry is therefore hard to evaluate. We approached this challenge by conducting a number of studies that, when viewed together, give an indication of the effects. We analyse the effects on five outcome variables which each affect the firm’s profit function: turnover, total wages, employments, gross profit margin and net surplus of firms.

Overall, the picture that emerged clearly indicated that the VAT reduction had an effect on all of the outcome variables mentioned above.

The gross profit margin for the firms also increased which created an incentive for new firms to enter the market and fewer to exit the market. According to our estimations, approximately 490 additional firms have entered the market as a result of the reform. Our results are consistent with expectations since the firms are not forced to do a full price pass-through but instead act profit maximizing.

Through descriptive statistics, some regional differences were also observed. The increase in total wages, turnover and employment are consistently larger for firms in urban and densely populated regions compared with rural regions. This can be explained by differen­ces in demand and degree of competition.

It is important to note that these results indicate short-term effects since a follow-up period of only up to three years is available. Furthermore, these are only estimated effects since it is difficult to know with any certainty what would have happened in the absence of the reform. Considering that the short-term effects are rather large and a significant share of the inflow of employees to the industry consisted of persons who were unemployed during the previous year, Growth Analysis assesses that the VAT reduction measure will have a positive long-term effect on employment. 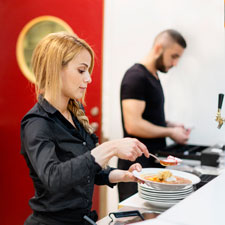