How can the central government promote investment in the extraction of innovation-critical metals and minerals?

Innovation-critical metals and minerals such as rare earth elements, cobalt, lithium and graphite are critical for modern energy and technical innovations to function. Products necessary in the shift to a sustainable society. Simultaneously, the extraction of these metals and minerals contributes to local environ­mental problems and also finances armed conflicts.

Sweden has good access to some of these metals, above all rare earth elements and graphite. The demand for the metals is rapidly increasing around the world and more and more countries are considering new mining. On behalf of the Government, Growth Analysis has produced a series of interim reports over several years, analysing the possibility for Sweden to be able to benefit in the long term from the potential economic gains that innovation-critical metals can create.

The question posed in this report concerns how the government may contribute in creating the conditions for investment of the sustainable extraction and refinement of innovation-critical metals and minerals in Sweden. Which kinds of technological, market and institutional risks exist in the investment of new mines and which of these can motivate different types of governmental activity.

Focus is on the attractiveness of investment in new mines and to a lesser degree on the conditions needed to establish an entire production chain and in the development of the entire ecosystem, with manufacturers, suppliers, customers and the academic sector. We are particularly highlighting the risks that exist within the investments of junior mining companies, meaning companies that have yet to produce any income from extraction, but wish to invest in the exploration of extracting innovation-critical metals and minerals in Sweden.

Sweden is generally an attractive mining country. Not least through a good infrastructure, good access to energy and a competitive level of taxation imposed on existing mines. On the other hand, the conditions for new mining are worse than in several other international mining regions.

The establishment of new mines for innovation-critical metals and major capital invest­ments by refining the metals is characterised by high risk for investors, because it is associated with time-consuming permission processes and high initial costs, but with no guaranteed income.

A mining region’s attractiveness for new investments is decided among other factors by the various uncertainties and risks that affect the net revenue. The figure below illustrates the size and distribution of net costs in various phases of a typical new investment in innovation-critical metals and the large costs that exist within the exploration, exploitation, and development phases. Often it can take around a decade before a mine actually produces revenue and most attempts fail. Because many mining projects often do not lead to any actual extraction, the cost profile means that it is only normal that costs are incurred without giving any revenue. This means that investments in mines are, in comparison with other environmentally hazardous activities, extra sensitive to uncertainties within the licensing procedure.

Schematic picture of net revenue from the operation of a mine 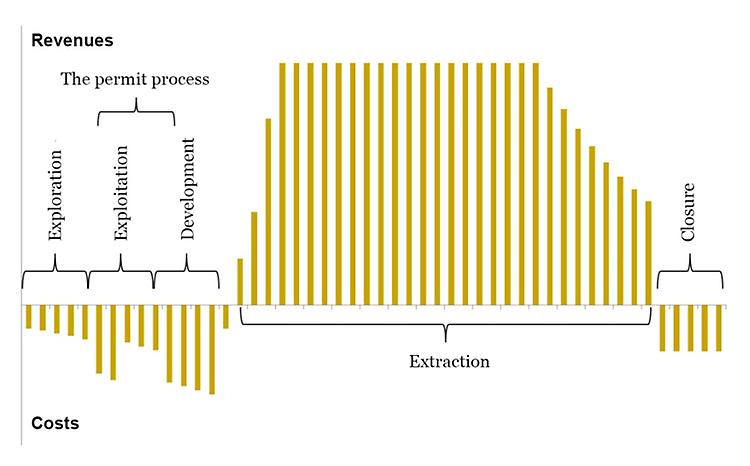 The institutional risk has increased

Today, mining companies perceive the outcome of the licensing procedure as relatively arbitrary, whereas some companies perceive it to be purely based on chance. The application of national and EU laws and regulations contribute to an institutional risk. A reason for the uncertainty is that minor mining companies consider it demanding to understand the Swedish licensing procedure. Not least in comparison with a number of other countries, it is unclear who is responsible for the various decisions that are involved in the licensing procedure in its entirety, for example who makes decisions concerning the establishment of a nature reserve. The major mine companies in Sweden often have it easier to handle this uncertainty than junior companies, because they are already established in Sweden and may therefore follow the Swedish debate more easily.

One important reason, which is also a policy dilemma, why the licensing process is perceived to be more uncertain than that of third countries, is a number of environmental EU Directives which negatively affect new investment in new mines in the EU. The national and European court practice that has been developed, makes it likely that the existing Swedish division of the licensing procedure into two parts, does not fulfil the EU requirements concerning an integrated and comprehensive environmental assessment, as provided in the EU Directives relating to Natura 2000 areas. This creates uncertainty and the need for change in the prevalent Swedish division in an admissibility and environ­mental assessment. However, the changes meaning that parts of the admissibility assessment take place within the environmental assessment are likely to lead to a less attractive risk profile for the investment in new mines, than what exists at present.

The market risk is high regarding innovation-critical metals and minerals

Extraction of innovation-critical metals and minerals in Sweden would be sensitive to an increase in mineral taxation. An increased tax would probably make the Swedish extraction one of the most expensive on the market, making it sensitive to increased operating costs.

The consumers’ willingness to pay has increased for sustainably produced products that contain innovation-critical materials. However, in order to realize this potential, some form of sustainability certification is needed. This enables companies to purchase these certificates and label their products. There are initiatives today, including private ones, with the ambition of develop such a sustainability label.

What can the central government do in order to spark new interest for investment in the mining of innovation-critical metals?

New extraction of metals and minerals must be weighed against the potential negative consequences regarding the environment, society and market interests, which come as a result of the industry. Designing a policy for the mining industry means that several difficult balances need to be made between different interests and stakeholders.

In view of the analysis surrounding the institutional, marketing and technological uncertainties and risks that exist in the investment in new mines for innovation-critical metals and minerals in Sweden, the following government interventions may be justified:

How can the central government promote investment in the extraction of innovation-critical metals and minerals?