The Swedish Agency for Growth Policy Analysis (Tillväxtanalys), The Swedish Embassy and the Swedish Entrepreneurship Forum arranged a seminar regarding the interrelations between labor market rigidities, human capital and innovation in a globalized world on Monday the 21st of October. The seminar was open to the public and held in the House of Sweden. About 45 people attended the seminar. 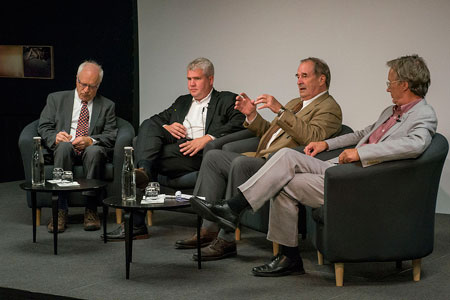 Keynote Speakers were Professor Roger Stough from George Mason University and Professor Gunnar Eliasson from the Royal Institute of Technology in Sweden. Concluding remarks were made by Professor Pontus Braunerhjelm, the Swedish Entrepreneurship Forum. After the keynote presentations the speakers gathered for a panel discussion in which Rolf Höijer from the Office at the Swedish Agency for Growth Policy Analysis also participated. This slot also incorporated a questions and answers session in which the audience was able to participate.

The topic of Roger Stough’s presentation was “Globalization and the Entrepreneurial University”. He spoke about the traditional role of the university in the United States and how the campus infrastructure needed to be expanded in a globalized world. Modern entrepreneurial universities face challenges of globalized markets for education and research, increased competition between universities and also new methods for delivering teaching, such as MOOCs (massive open online course). Stough spoke about tackling these challenges based on his own experience as vice president for George Mason University, (a relatively young university in the Washington DC region which has grown very successfully over the last 25 years).

The role of the university is to provide education and research and Stough enhanced the importance of building relationships with market actors including government agencies. He talked about the research mission in the modern university that he argued is moving to a view on R&D that emphasizes Development more strongly (than Research). Stough also spoke about the importance of creating new knowledge outcomes such as more innovation and entrepreneurship in the universities. The Universities’ role in the society is to be pioneers and to be able to provide rapid and continuous innovation that can tackle future market requirements, according to Stough.

Gunnar Eliasson’s topic was "Labor Market Rigidities, Higher Education and Innovation: Some Swedish Experiences”. He focused on the function of the education and made some comparisons between the American, Swedish and German labor markets. He also spoke about how human capital is created in the formal schooling and the different aspect of overeducating students at universities compared to views of how firms make their own investments in human capital.

After the seminar there was reception that opened up for further discussions and questions with the speakers.