Statistics and indicators regarding industrial conversions to green technology

- A suggestion for an environmental technology statistic portfolio

In this report, Growth Analysis provide an account of the Government task to further develop statistics about the Swedish environmental sector. Also included in this task is to manage the statistics that have previously been produced by Swedish Environmental Technology Council, Swentec. These statistics however only cover environmental companies, that form only a small percentage of all companies.

In order to create a better picture of the 'green' structural change, Growth Analysis suggests completed statistics that encompass more areas of structural change; innovation craft within the environmental technology; the commercialisation and implementation of green innovations; the development of green exports and the entire environmental efficiency of trade and industry.  At the same time, ambition exists to meet the demands for statistics regarding the traditional environment sector.

The suggestion is that of an 'environmental technology statistics portfolio' that proposes the content of statistics for:

Environmental patent data is the most common indicator of innovation. A deficit however, is that the method only captures technology innovations. Comparisons between countries are also problematic, as differences may be as a result of differences in the willingness to award patents etc. Hence the method has a high dependability in such a way that each application for environmental patents is included. The intentions of both OECD and Growth Analysis are that patents are a fair indicator of innovation and economic development.

The consolidation of statistics show that there is a high number of Swedish companies with environmental technology innovations. In terms of applications for environmental patent applications per GNP, Sweden is the fifth leading country in the world, after Luxembourg, Japan, Denmark and Germany. To a certain extent, such patent comparisons reflect the trade and industry of a country. A high number of Swedish and German patents in 2009 fell under the category of 'emissions and fuel efficiency for transport', whilst the majority of patents in Denmark and Spain belonged to the category 'energy production from renewable and non-fossil fuel sources'.

One of the goals of green transition is to increase the environmental efficiency of trade and industry. To measure this, statistics for the greenhouse gas intensity from trade and industry have been suggested. Nevertheless there are shortcomings with using the measure of intensity as indicators for efficiency, as the intensity can change without being as a result of changed efficiency. Statistics for greenhouse gas intensity can however be assessed for each sector and completed with knowledge of the technology development of the sector. With this, accuracy of statistics is increased in indicating development over time.

Statistics for greenhouse gas emissions from various industries per value added by processing show that the greenhouse gas intensity from trade and industry reduced by 42 per cent in the period between 1993–2008. There is also data for the period 1970–1990 that shows that structural change did not provide an important explanation for the reduction in greenhouse gas intensity. Instead, it was mainly as a result of a changed mix of energy and better energy efficiency within the respective branches.

It is difficult to identify which companies in Sweden are environment companies, i.e., consumers or producers of 'technology that is less damaging for the environment than other accessible alternatives'. One source is of course Statistics Sweden (SCB) and their database of environmental companies that, as a rule, consist of companies in the 'traditional' environment sector (1), but also environment areas such as sustainable agriculture and fisheries in addition to renewable energy. Yet the sector only represents a small per cent of the total company population and it is not obvious for what an increase or decrease of the environment sector will mean for the green structural change. Nevertheless, these statistics create a part of the suggested environmental technology portfolio.

The collation shows that the largest group level, non electrical consisted of around half of the product exports (3) in addition to electronic machines and apparatus (4).

'Waste and scrap' of various kinds provide a significant export total within certain product categories. In 2010, almost 19 per cent of total environment technology exports consisted of 'waste and scrap'. Moreover, the product group has strongly increased since 2003, when the total was seven per cent.

(1) Companies within water, air and waste treatment in addition to waste management.

(4) Electronic machinery and apparatus, electronic material plus parts for such products, apparatus for recording or production of sound etc. 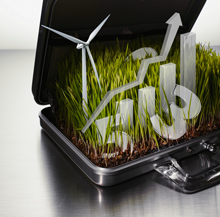