Publicly funded support for the promotion of quality development

Based on its evaluation, Growth Analysis presents the following comments on the report.

Is SIQ needed to day?

When SIQ was formed in 1990, quality was relatively unknown as a manage­ment tool and the consultancy market for these services had not yet developed. Several things have happened since then. During the 1990s, the Confederation of Swedish Enter­prise ran a campaign called “Continuous Improvements” which aimed to spread aware­ness of the need for quality improvement. The Swedish Working Life Fund established programmes that focused on organisational development where quality was a key component. Consult­ing firms for LEAN, TQM and other management approaches were set up and these have in recent years also found new customers in hospitals, schools and other public institutions.

Both large and small companies are today aware of the need for continuous improve­ments and we can therefore ask ourselves whether quality has become obsolete as a manage­ment tool. Recent research shows that the companies’ productivity development in a particular sector varies widely and that the difference between high-productivity and low-product­ivity companies can to a great degree be explained by differences in the ability to lead and organise the business.[1] This ability to lead and control also appears to be even more im­portant in this era of globalisation since companies’ endeavours to establish themselves in new markets or grow demand all instruments in order to achieve efficiency through inno­vation, research and development efforts and in the form of design or quality work. Quality, however it is defined, thus continues, hardly surprisingly, to be very important to strengthen trade and industry’s competitiveness.

Is SIQ still needed to day? When SIQ was set up, one of the aims was to com­plement the market as a market failure was be­lieved to have occurred. That this market failure still exists, first and foremost in the general promotion of knowledge about quality and methods to increase awareness of the role of quality in the success of the business, should be seen as a reasonable assumption.

Market-complementary activities often take the form of non-profit-making public or pri­vate players. In Sweden today, non-profit-making players exist in the quality manage­ment field but according to the report none of them are adequate alternatives to the work that SIQ does on the promoting side.

SIQ is highly praised but lacks a goal structure

Generally, the companies and organisations that have had contact with SIQ through semi­nars and training are satisfied. SIQ has developed knowledge and information about quality pro­cesses that individuals and organisations can act on and use in their own activi­ties.

SIQ have on the other hand been criticised for not reaching beyond a limited group of or­ganis­ations. The report shows that since the 1990s SIQ has stagnated as regards the num­ber of companies that have come in contact with SIQ’s different services. Several of the foun­dation’s activities have seen a decline in the number of participants in recent years and the number of participants in the Swedish Quality Award has fallen over time. In 1999, 17 organisations participated; in 2012 the number was down to two.

The reasons can for example be found in:

1.      SIQ has failed to develop a goal structure starting with a general goal and proceeding to more detailed outcome goals.

2.      The government’s lack of involvement, partly in steering and partly through the appropri­ation having fallen in real terms over time, has led the organisation to adapt to the stakeholder association’s needs and generate revenue through conferences and course fees.

Primarily the first observation means that it is difficult to evaluate how well and to what extent SIQ fulfils its over­arching aim. Providing courses in quality development might seem natural but this is an area where there are private players today; SIQ’s role should rather be to ensure that the supply of courses maintains a certain level of quality.

Promotion of quality development in the future

Growth Analysis’ conclusion is that a market fail­ure still exists which justifies state in­volve­ment. The question is how this is to be organised and how comprehensive it should be.

Against this background it is reasonable to try a prerequisite within the same framework but with the following changes:

1.      That continued government funding should be subject to the condition that a process of change begin at SIQ according to the guidelines given in Sweco’s report and that this continue at full strength for three years.

2.      That continued funding be secured for this three-year period.

The process is divided into two phases. The first will develop a goal structure based on a reprioritisation of the various areas of operation. A target population is to be identified, measures to reach this population implemented and outcome goals set that align with SIQ’s long-term focus, and interventions to attain the goals set defined. In the second phase the new strategy will be implemented and a new evaluation made. The time for the total change process should not be set at longer than three years.

SIQ’s funding has been constant in nominal terms at approximately SEK 2 million since the institute was set up. Since a restart may require new initiatives, an upward adjustment of the appropriation to approx. SEK 5 million in 2012 prices should be con­sidered.[2]

Which areas should SIQ concentrate on in the future? Generally speaking, the emphasis in public-funded activities and operations should be on areas of interest to society where there is no willing­ness to pay. Of SIQ’s activities, this concerns first and foremost disseminating knowledge and research findings in the field of quality work and quality processes and facilitating inter-organisation and cross-sectoral ex­changes of experience. The Swedish Quality Award is a way of communicating the importance of an effective quality effort and the possibilities it offers. SIQ’s work on training examiners should therefore continue. The challenge, however, is that the number of participating organisations must increase consid­erably for the award’s prestige to correspond to the relevance of quality management.

The government’s responsibility for support and control of SIQ

Growth Analysis considers that it is reasonable for SIQ to be one of the Swedish Agency for Economic and Regional Growth’s tools for promotion of trade and industry.[3] The Swedish Agency for Economic and Regional Growth is at present responsible for several such tools. Alongside SIQ, the agency is the parent body of the Swedish Indus­trial Design Foundation (SVID), the Entrepreneurship and Small Business Research Institute (ESBRI), the Enterprise Agencies organisation, and the International Entrepreneur Association in Sweden (IFS) advice and guidance centre. The Swedish Agency for Economic and Regional Growth promotes development in companies through among other things product development support, regional support, investment support and transportation support and regional structural funds. The agency also main­tains the verksamt.se website as a node for all of Sweden’s company-focused support measures.

The OECD’s report on Sweden’s innovation policy makes recommendations for a more effective innovation system through among other things fewer and larger organisations that work with funding and promoting research and innovation.[4] Within the Swedish Agency for Economic and Regional Growth’s framework it might therefore be reasonable to dis­cuss greater co­ordination between the agency’s other promoting players. There are for example similarities between SVID’s customer-oriented work to promote knowledge and information concerning design processes and the work that SIQ does.

Growth Analysis also believes that SIQ’s parent body must take responsibility for the gov­ernment’s vested interest in promoting quality management being given a better goal structure and activities according to the proposals outlined above and coordinated appro­priately with similar promoting initiatives. For example, clear control strategies should be formulated for how the state acts in SIQ and similar organisations.

[1] See for example Nicholas Bloom & John van Reneen (Journal of Economic Perspectives vol 24 no 1 2010) and Robert Gibbons and Rebecca Henderson in ”What do managers do? in the Handbook of Organizational Economics 2012 who present results showing that companies that are better at implementing management processes also win in efficiency in the form of profits, share value, survival and productivity. The term “explanation” refers here to evidence of a significant covariation but not a strictly causal relationship.

[2] The labour cost index for salaried employees in the field of company service provision is probably an appropriate deflator. Growth Analysis’ calculation based on Statistics Sweden’s index results in an adjustment factor of 2.5.

[3] On the advice of Growth Analysis, Sweco has discussed alternatives to SIQ acting in its own right, for example if it (in some new form) could be incorporated into the Research Institutes of Sweden network of research and technology organisations (RISE). RISE has similar stakeholder associations. Sweco, however, considers the differences in activities and ways of working to be too great. Growth Analysis agrees with Sweco’s assessment but notes that this can change as RISE continues to develop. 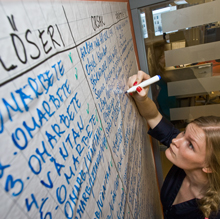 Publicly funded support for the promotion of quality development